Wow. They did it again. Just when you think the Cincinnati Bengals are going to pull off a massive upset in Green Bay, the lay an egg in the second half and lose to the Packers 27-24 in overtime. There are only so many losses like these that a fan can take before they snap, and just simply need to move out of the city and root for a new team. 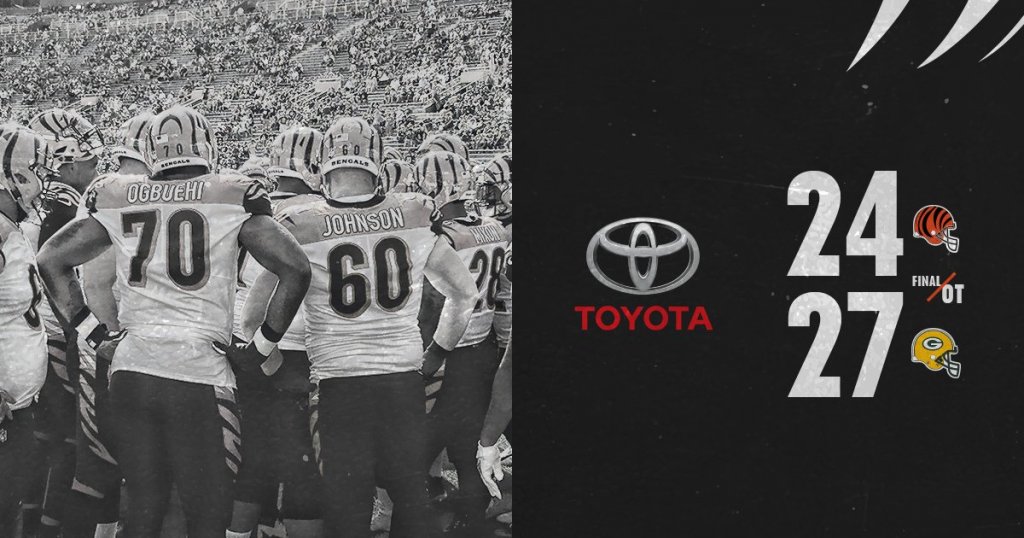 I mean, this is heartbreaking stuff. If there’s one thing I can give the Cincinnati Bengals credit for, it’s that they are amazing at losing. Is there any other team as creative at raising your hopes only to kick you in the junk?

Let’s take a look at this week’s script.

After a dismal 0-2 start where they failed to reach the endzone one time, the Bengals fire their Offensive Coordinator and bring on Bill Lazor and the dawn of the #LazorCats.

It’s a new era. Maybe there is a new hope. And then, what do they do? On the first possession of the football game, they drive down the field 79 yards and score a touchdown, Dalton to Green. It’s been a while, but you think to yourself, “hell of a start.”.

After a Packers answer, the Bengals score again. And, William Jackson III gets a pick-6, only the 2nd of Aaron Rodgers career. Can you believe that? Only 2 pick 6’s!!! And, the Bengals have one of them!

We go into halftime up 21-7. Though, the punt off of WJII’s head for a fumble was an ominous if not obvious sign of what would happen in the second half.

In the 3rd quarter, the Bengals O went bye bye. Lazor got conservative, and the Defense began to get tired. As a Bengals fan, you knew it was only a matter of time.

But, it was still there for them! When the lead was cut to 7, they drove down and had great field goal range. Then, Dalton takes a terrible sack and Bullock misses a 48 yarder. Of course, he misses on the day that Elliot kicks a 61 yard game winner. Doh!

All of this said, the Bengals D is holding their own, and on a drive where the Bengals could have sealed the game, Dalton has a clean pocket and a wide open Brandon Lafell for a touchdown. And Dalton goes Dalton and overshoots him by 15 yards. I mean … how do you miss that throw? By so much?? I’m going to go to bed kicking the dog over that one.

Later in the game we see our promising back with talent, Joe Mixon, who had a good game, slip and blow up a crucial third down. We get the field goal, but we needed 6.

IT IS NO SMALL THING TO BE A BENGALS FAN.

This is hard work. This takes dedication. For many, they are saying, we’re out. Give me a cash offer on my house. Let’s close quickly, and I’m outta here. No, I won’t be a Steelers fan. I could never sink that low. But, these Cincinnati Bengals have me thinking about selling my house fast and picking up a new team.